If you're thinking "FINALLY! a professional video dedicated to this fabulous, intriguing, complicated and badly misunderstood hobby!" then you're in for a big disappointment.

I vaguely remember watching the original Japanese version online some zillion years ago and finding it totally sleep inducing....even somewhat vomit inducing. OMG, I feel so mean saying these but I swear its nothing but my honest opinion. You can't expect this blog to be all preaches and cream righttttt ?

Can you guess who she is?

It might have been due to the fact that the original video footage was filmed in 1996 which is omfgwtfbbq 13 YEARS ago. More than a decade! Which is more than enough time for fashion trends to come and go and maybe come back again only to be last season still ... if you get what I mean.

I mean, just the screencaps was enough to make me cringe in horror with palms over face. All the epic red lipsticks (which was all the rage then I supposed?) and super high waist were icons of that erm...epic period. But the thing that puts me off most was the lack of good hairstyling, wigs and pretty makeup. 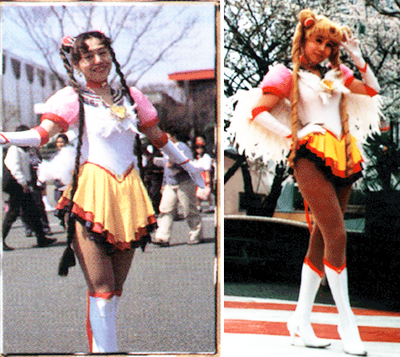 She is Barbie, the reknown SailorMoon Cosplayer! remind me to kill anyone who has old cosplay photos of me...

But I guess on the bright side, this video serves as a form of encouragement to continents or people from any continent who feel their own cosplays can't measure up to the Japanese. Cheer Up! give yourself another 13years and you can be epic awesome too XD