Anime Festival Asia came and ended with a blast! Sorry this entry came slightly late, life was seriously consuming me. 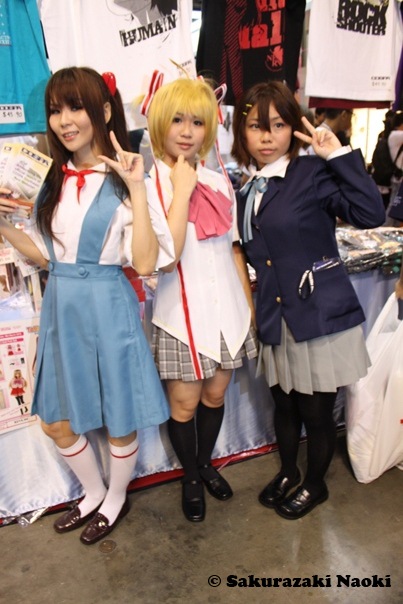 So much to talk about! I was one of Cospa’s booth girl on Day 1 so I didn’t get to walk around as much. But it was an eye opening experience and I especially love playing the Ja-Ken-Pon Game with everyone! It was the highlight of the job and pretty much….the only useful things we could do as a Booth Girl |||oTL

But anyway, coming back. I thought it was pretty cool how the usually bashful singaporeans could open up and

dance/play along with us. I guess that’s what make events like these fun! We can cast our stringent masks and discipline aside to enjoy and indulge ourselves a little =)

If you missed our Ja-Ken-Pon Session the 2 days at AFA, you might wanna check out this video. 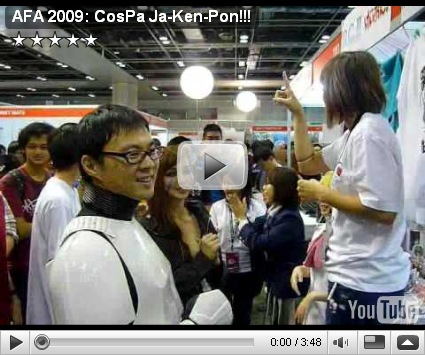 Danny Choo and Alodia joined us at the last game of the day. We were supposed to play the game at 6pm but we started at 5:45pm instead because the two celebrities happened to hopped by and decided to join our game. So we started earlier.

Danny Choo seemed like a nice guy and Alodia is drop dead gorgeous. I don’t understand how she can wear a wig the whole day and still have some pretty , straight and smooth hair afterwards! Is it the phillippines water???

Oh, speaking of which, if anyone of you missed the Regional Cosplay Competition like I did. You might wanna check out these videos.

Live singing! Gotta hand it to our ladies here for daring to sing LIVE! A pity the sound system didn’t seem so good =\

I love how true they were to the real ST show and the whole stage ‘drama aura’ really brings you into the series.

Love the gundam! As a mecha, your movements are obviously very obstructed. So I think it’s pretty cool Clive could still deliver some sort of performance in that suit.

Their pet props were soooooooooo adorable!!!!! I had the chance to touch their props backstage and their ‘sipuxiang’ were freakin HEAVY!!!! the whole thign was actually strapped and hanging from their shoulders so you can imagine the pain >.<! I think it was around 5 kg or so….

I’ve been wanting to do Taikoubou since forever but never got a chance to really do it. So I was pretty surprised to see someone do this relatively ‘vintage’ series. Much loves to people who do classics cosplay XD!!!

Hahaa… I was so not expecting a Code Geass to pull a somewhat comedic skit. I love the part where Cloud came out xD I wonder how Kaname felt watching it.

*goes to corner and ROFL*

Masako and Sizer did great with their props though its a pity the skit didn’t showcase their costumes more. Can really tell how much fun they had with the skit xD

Awesome props and costumes lah !!!! How do the indonesian do it ?!?! I’m usually not a big fan of elaborate costumes but they are totally worshippable *bows and worships*!!

Some random videos I paparazzi-ed while at the booth. Danny Choo and Alodia shaking hands with Sharon and Kenneth.

Because I was stuck at the booth the whole day and was too tired to stay for the concert, you could say I missed out many part of the event. And I missed out a lot if not almost all the cosplays of Day 1. If you missed out like me, fear not! Here is internet and Youtube to the rescue!!!

Gonna end this entry with a video some of you guys might have already seen at my Youtube Channel xD. 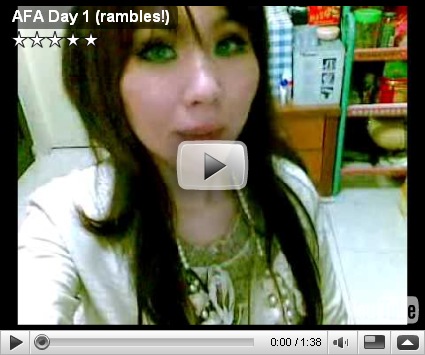 I was soooo frikin tired I was doozing off… not KNOCKING out on the train back home! I tried to watch the videos I captured on my camera but within 6 seconds of playing it my heads were already dropping!

In case you’re interested, my schedule that day was. Sleep 3am in the morning, rushing Day 2 costume and woke up 6am in the morning. Did my basic make up at home, then went down to Suntec. Started booth work around 10am (late T_T). After that, it was near 8 hours of standing. We did seat down time to time and had our lunch break of course, but it was still a very physically straining job. So yeah…. could barely lift my eyes!

More about the event at my next entry I guess. For now…time to sleep!