And so, after the first very rushed Mahou Shoujo Photoshoot, Brian and I realise we still have a lot of ideas running wild for Homura. Henceforth we decided to organise another photoshoot!

Information about how I made my costume –> here 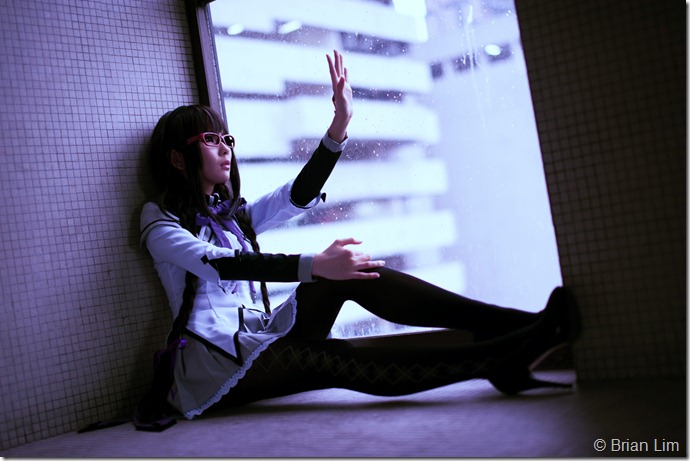 The location for the shoot was suggested by Brian. And it turned out to be an awesome spot. Awfully overused but nice nonetheless xD

I was a careless klutz and totally forgot to prepare weapons for Homura. As any PMMM fans would know, she has an arsenal of them. Comparable to the military perhaps =_=; Since it was a reshoot photoshoot, we really wanted to have bigger guns for her so I borrowed them from Richard and another friend of Brian. Much thanks to Brian for helping me pick up the gun from Richard the morning of the shoot T___T! Super thankful to him and so many people for this shoot, pop over to my other blog if you’re keen to read my heartfelt talk about this. 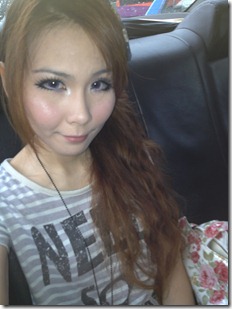 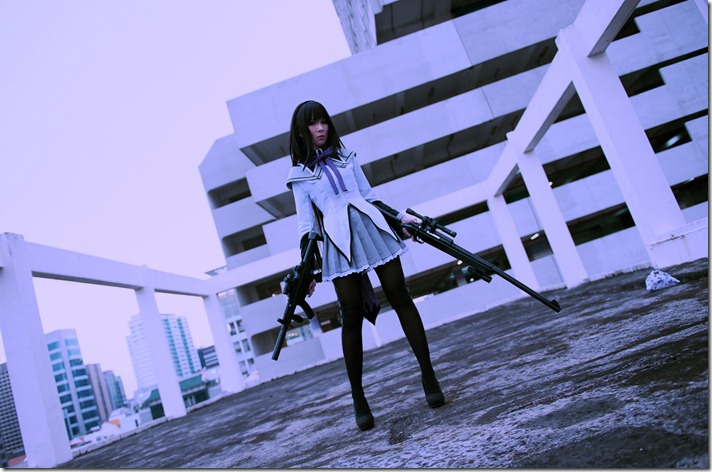 Mad love how slim Brian made me look xD 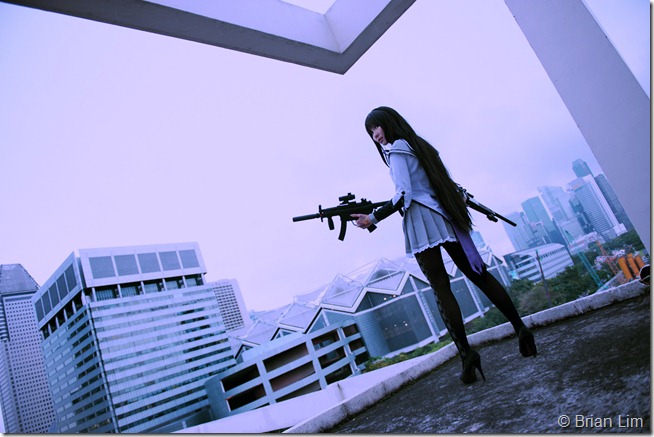 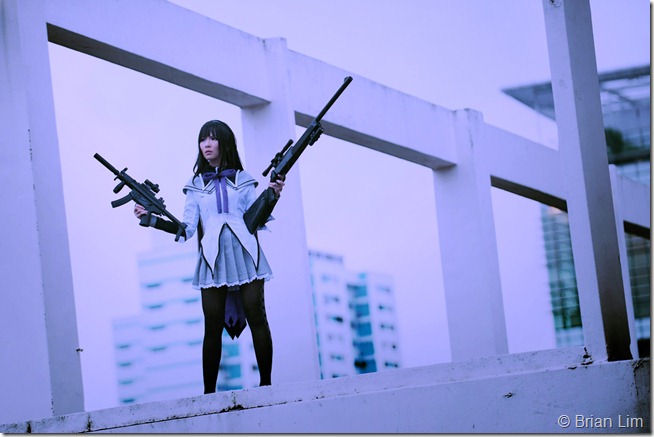 I know the way I held the guns were amateurishly bad. Please forgive me >.<… I forgot to hold the gun in my right hand with the “Shooting” mode. 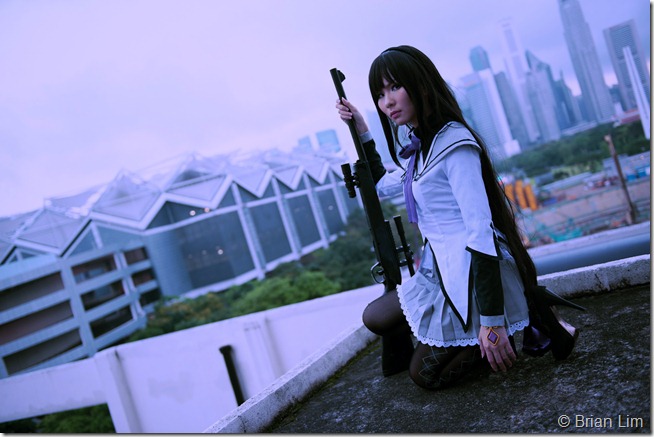 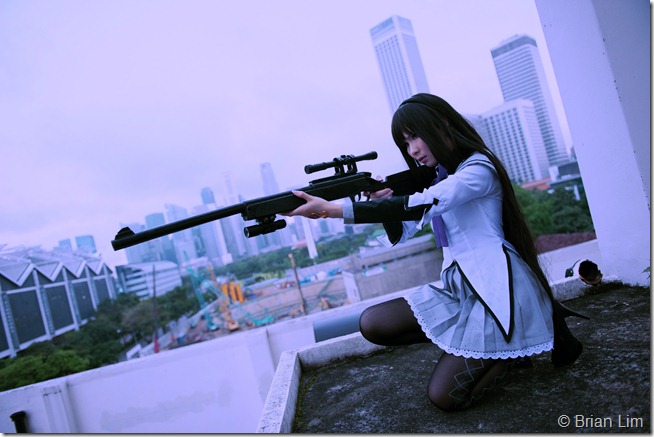 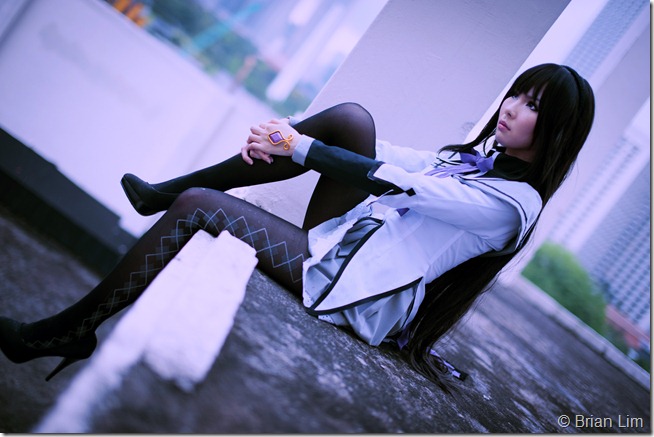 I know the effect would have been a lot better if I was a few inches closer to the edge. But seeing it was probably a 4 meter drop, I didn’t dare move any more. It might be impossible to tell, but it was actually drizzling when we took these pictures. We had only just reached the location and gotten ready before it started to rain.

So Brian and I decided to brave the drizzle before we lose anymore light. After so much preparations and work, we’re not going to get deterred by some puny rain! 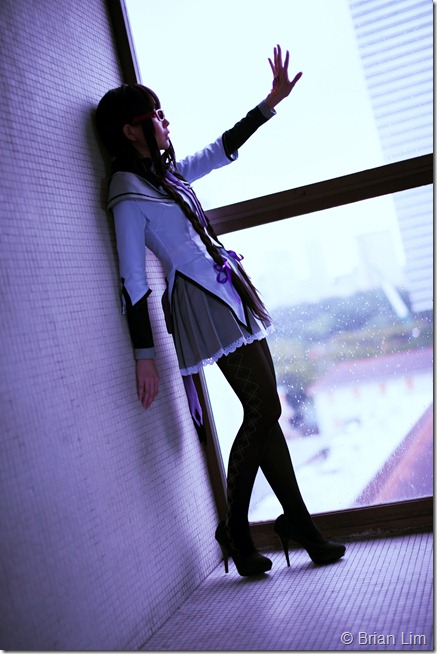 Then I plaited my hair and became Megane Mura! We both agreed that Homura’s geeky past was an important factor that made up who she is now and was also what makes her so interesting/sad.

At this point we decided to get out of the rain and do some ‘cure’ shots while waiting for the rain to subside. 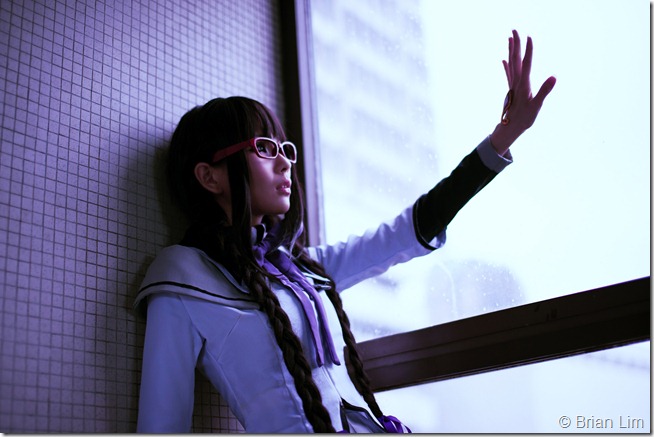 I can almost hear the puke =_= 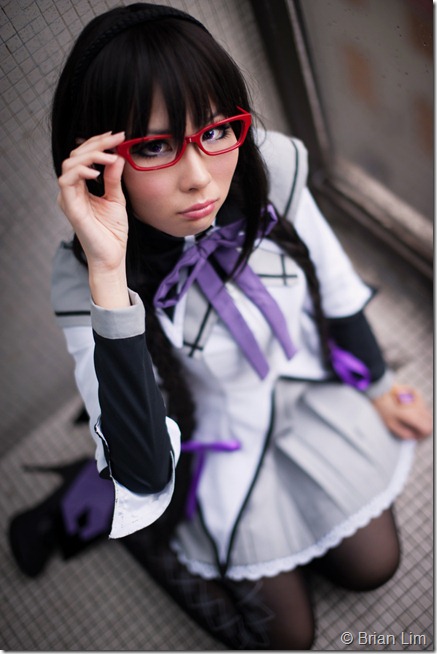 Some BTS photos from either Cvy or Maria ^^; Brian looks like a scary perpetrator here LOL 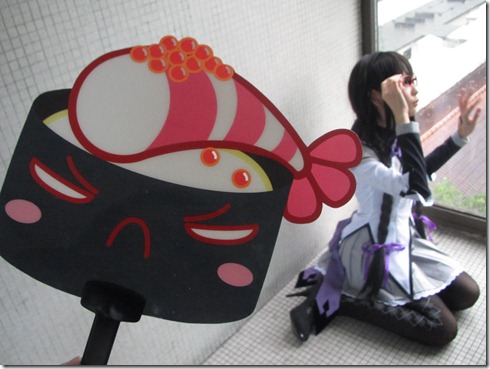 Another random BTS photo the helpers took xD. They were so bored they took our Cvy’s fan and start playing with it xD 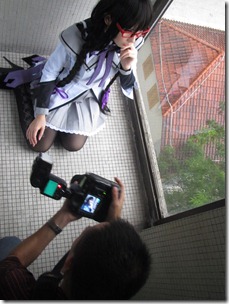 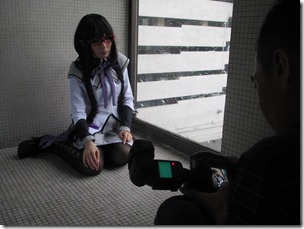 More BTS photo of Brian hard at work. And the LCD on his camera is telling me Brian still owes me a lot of photographs!*looks at Brian* 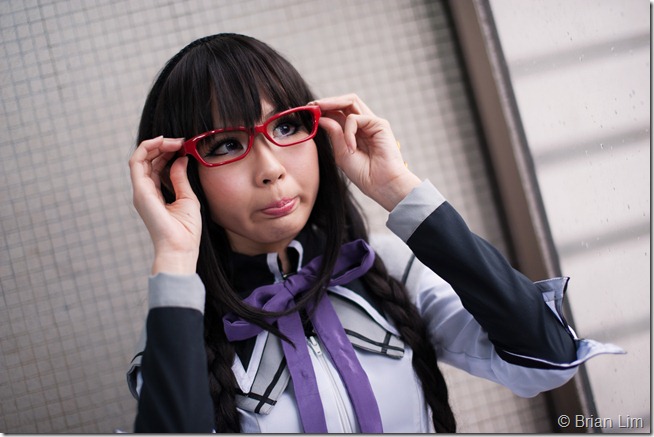 Found the need to make a wacky face xD

Special thanks to Yuanie for lending me Homura’s socks and her shield! Just in case anyone’s interested, the red glasses were bought from Daiso and then sprayed over with Spray Paint.

I hope you guys liked the photos! It was a very fun photoshoot despite being the only cosplayer. We also got the chance to test out many things! There are still photos to churn out so look forward to part 2 soon! Leave a comment and tell me what you think xD!

Anya said…
*A* I love your photoshoot photos <3
If you don't mind me asking, may I know the location of the place where you have your photoshoot? I really love the background but I have no idea where it is
May 15, 2012 at 12:24 PM