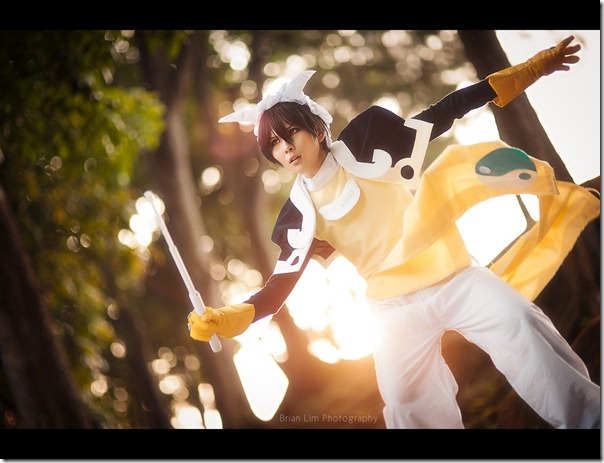 I’m sure most of you reading this blog have no freakin idea what series this is. This is a Manga turned Anime series called Houshin Engi (Soul Hunter), it ran in Weekly Shounen Jump from 1996 – 2000. There is a total of 23 volumes and the Anime version was broadcasted in 1999.

“ The story is set in legendary China. A beautiful female fox spirit named Dakki (妲己?) is controlling the emperor Chu-o (紂王 Chū-ō?) and the ruling In (殷) dynasty, and is using her power over him to do evil in the nation. An immortal-in-training named Taikobo (太公望 Taikōbō?) is chosen by the great immortal sages for the Houshin Project (封神計画) — to seal away or destroy the evil demons that infest the world. In the course of his adventures, Taikobo gathers other powerful companions and sets out to seal away the demons and eventually destroy the fox-spirit Dakki. There are significant plot differences between the novel, the manga series and the anime.”

I started reading this manga when I was just a school kid. I even remember clearly how I picked up this manga without any recommendations from anyone. I was renting Mangas from a Comic Shop then and someone kept renting away the final few volumes of YuYu Hakusho! Many trips to the Comic Shop resulted in empty returns so out of boredom and frustration, I randomly pulled a book out from a shelf, sneered at the front cover, read the nonsensical introduction at the inner flap of the cover by Fujisaki Ryu (Author) and decided “ Oh fu**! I’ll just read this then ”.

And I found myself devouring the next 22 volumes of manga hungrily. 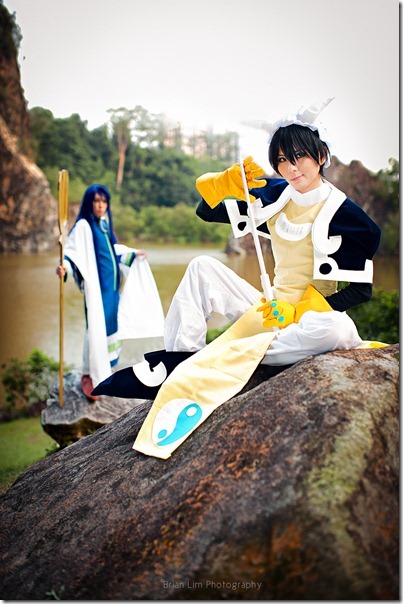 To be honest, I’ve always loved Heroines. But I also love Heroes. And I’ve always wanted to cosplay the heroes but I never quite found the courage to attempt many of them because I felt my feminine physique wouldn’t cut it and my cosplay skills were not good enough to assist me in my endeavour. I’m glad after so many years of procrastination and ‘Cosplay Skills’ accumulation, I finally found the courage and partner to do it! 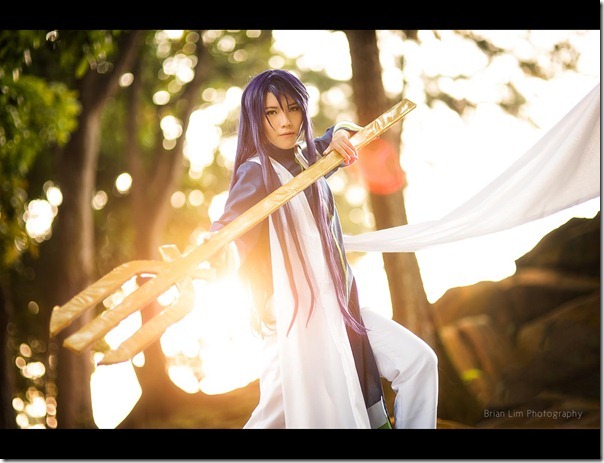 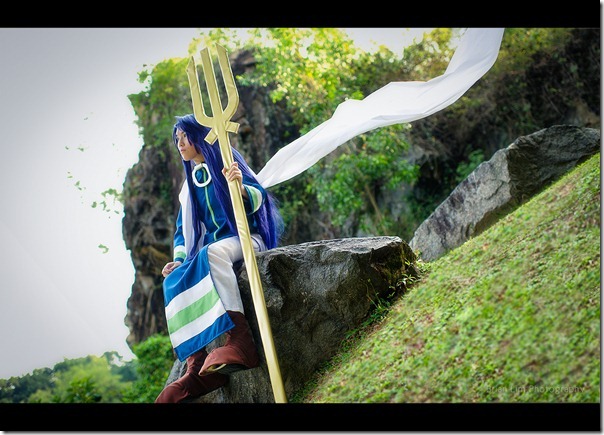 Special thanks to Yuanie for agreeing to be my Yozen and sticking through to her promise >w<! We initially had a 7-8 person strong team but things cropped up and we had to indefinitely postpone it ^^;;. *sigh*

So you can say this is probably my first “Childhood dream come true’  cosplay. Other than Battousai (from Rurouni Kenshin ) which I did very very long ago, but then again, I cosplayed Battousai/Kenshin when I was still fresh into the fandom. So I was more than a little surprised my love for Houshin Eng after 12 years, was still enough for me to push through this cosplay. 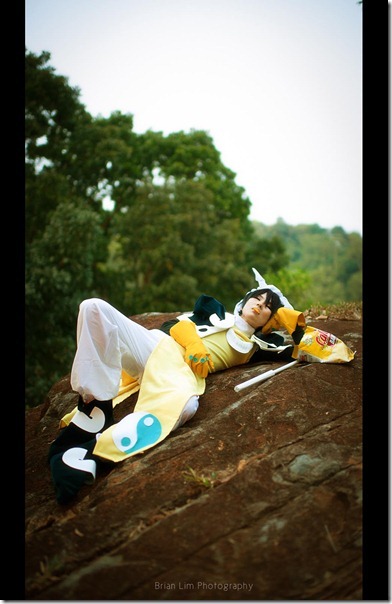 Taikoubou is probably one of the wackiest and most despicable Shounen Manga Hero ever. He sleeps and eat potato chips in the middle of a war. He acts like an idiot but always have a plan. He isn’t the most powerful but he is a leader that everyone looks up to. And above all, he always place himself the last and will do his best to save every last soul he can. To me, that is real ‘kakoii’. Not a sword wielding, demon slashing and flying around in supersonic speed sort of cool but a totally different level of admiration and courage. I’m sure we’ve all met someone similar in our lives before and secretly hoped we could be like him/her even though we never admit it. Kinda like Rin from AnE too haha. 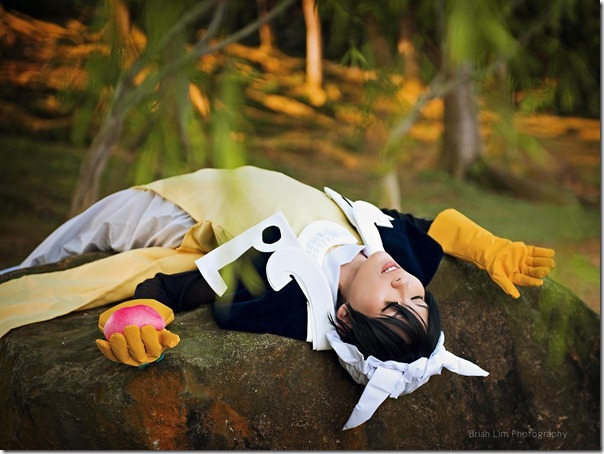 It almost feels unreal that I’m here with these pictures and the costume done. At every moment before the shoot, I was entertaining thoughts of cancelling the Cosplay altogether. I didn’t have enough faith in myself to finish it. At every step of the way i was questioning myself. “ This is such a low profile and old series, the costumes are not beautiful/cute/sexy/handsome and it will never propel you into idol statues or gain you anything; why are you still doing it? ”

I’m really glad I did it still.

I know for certain I’m not the only one who let such negative thoughts run through my brain. So I hope people won’t judge me for being so brutally honest with my feelings. Anyone have a similar experience? please comment and let me know!

Like all costumes I make, this seemingly simple costume was also such a pain in the ass to make. I had a lot of trouble constructing the top since it was so different from the costumes I’ve made before and it seems almost uncomfortable to wear!

Every single bit of this costume was made by me except the wig and the black long sleeves top. The white pants was recycled from my Chang Wu Fei (Gundam Wing costume! Maybe I’ll do up another entry to talk about the costume construction if you guys want =) 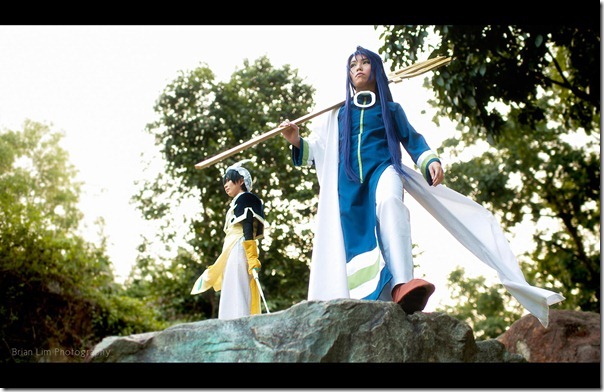 I’d have to thank Brian for the awesome photos and edits! A cosplay cannot be completed without good photos! I’m glad I managed to psycho him into picking up the series and liking it xD Also thanks to the super cute Erika and helpful Roger for all the Saikang help on the shoot itself! I shall talk more about the photoshoot on my next entry =)

Apologies for the insanely long ramble. I just had SO MUCH I wanted to say because so much love have been put into the costume and character. Remember to leave me a comment and share your thoughts ^^!

Even though if it's an old anime series that no one's cosplayed before,it doesn't matter as long as you liked the series, and wants to do it, why not? =)

And really, seeing the photos, it's awesome. tempting me to look at the mangas, and anime. lol.

Anonymous said…
I loved that series and Taikoubou as a character. Those photos of you lazin around on the rock, perfect. I love when people cosplay the "oldies" i get a little tee-hee about it when I see them.

Unknown said…
You look sooo cute on your cosplays! Awesome <3 check out my blog too it's about my cosplay adventures.
October 18, 2012 at 2:33 PM