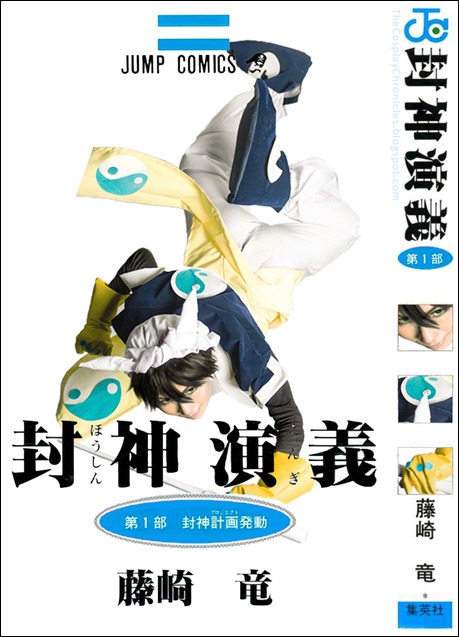 This is part 2 of the photoshoot that I did last September with Yuanie and Brian! Click here to read the first part!

If you have never heard of Houshin Engi (understandably since it’s 12 freakin years old!) , I highly recommend you to read it if time permits! There is a Anime spin off but the Manga wins hands down! Click here to read the WIkipedia sypnosis! 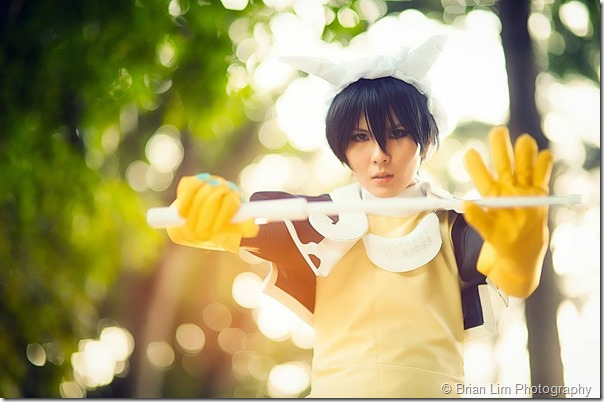 I am cosplaying as a Taoist Sennen called Taikoubou. He is based on a historic character and he is also the main protagonist of the series. He is the leader of the group and is respected for being a highly intelligent strategist. 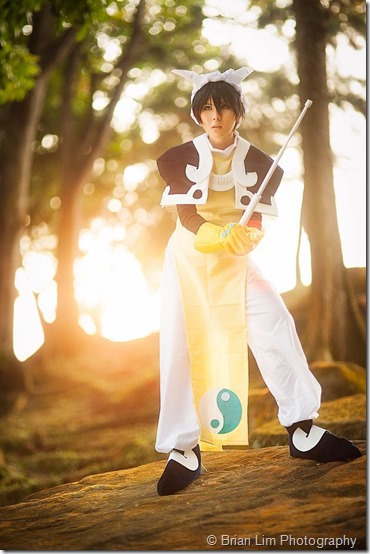 He uses a weapon called the “Dashinben” (god whipper) (which in my opinion looks very ugly =o=… why do I always cosplay/ like characters with very mweh character design =o=?)  which is a wind elemental weapon that allows it’s wielder to control wind.

IMHO, the weapon is very befitting of him, in fact, it is almost metaphorically him! 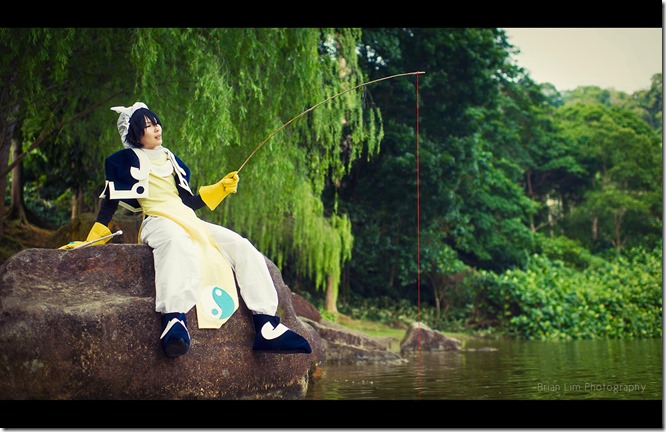 Much like wind, Taikoubou is a character that influences and manipulates the situation around him gravely yet unseen. He is powerful yet most of the time you can‘t take him seriously! This is the guy who would eat and sleep at the same time XD

In the picture above, he is fishing… with a hook that is straight. 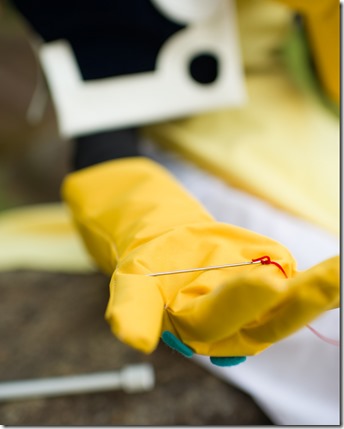 ”愿者上钩”, literally translated to  “ The willing will take the bait”. This is a Chinese idiom supposedly spoken by Taikoubou’s historic reference. 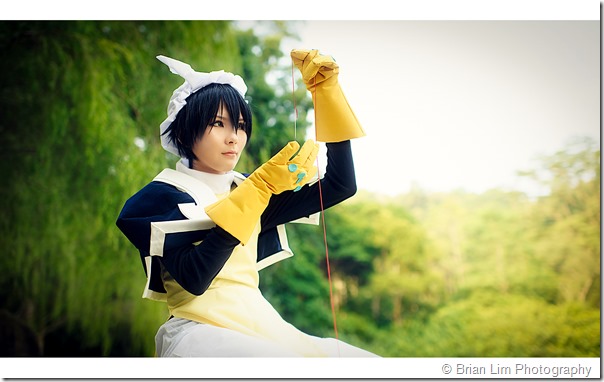 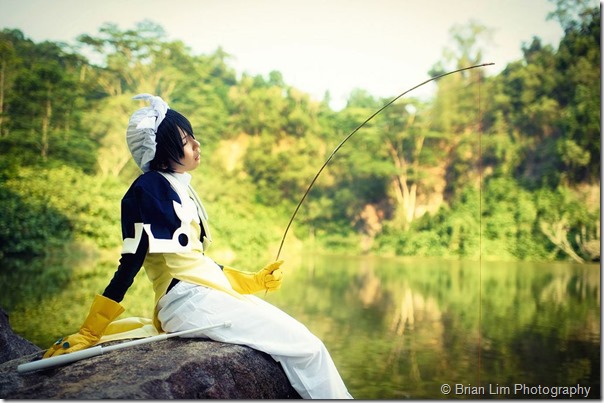 Much thanks to Brian for helping me to photoshop my Fishing rod. It was made from 2 canes , the type that asian parents use to whip their kids xD They were chosen for their rustic feel but unfortunately , they don’t come long enough for fishing rods. So I had to tape 2 canes together to form a rod. It looked ridiculous but that was all I could do… 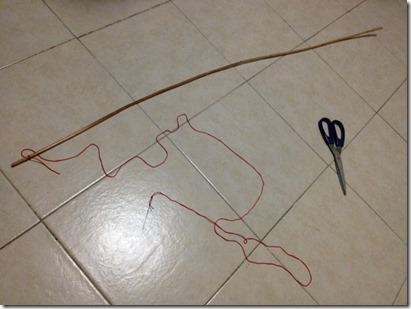 Yes, this is every asian child’s worse nightmare xD

I had a lot of fun during the shoot. Being able to cosplay a character I’ve had on my Wishlist for near a decade was unbelievably exciting. I really liked Taikoubou’s noble but wacky personality and I really let it all out during the shoot! 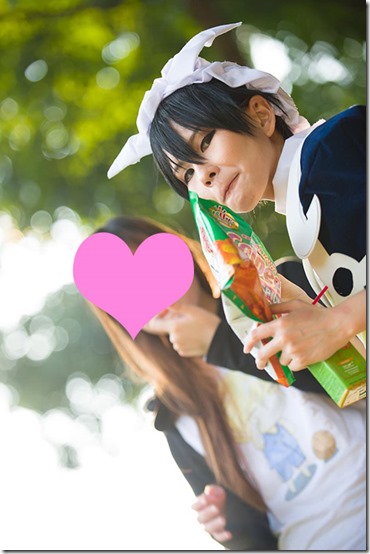 Whenever the photographer is not shooting me, I would be gorging myself with chips and green tea xD 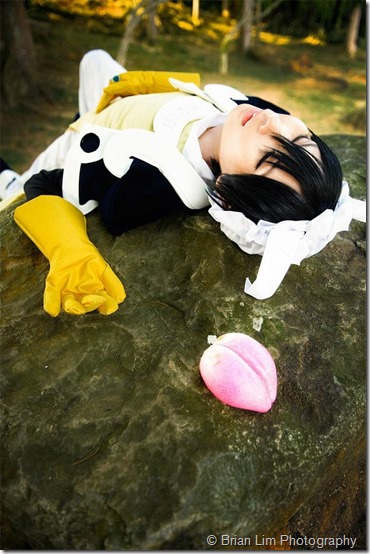 If you are a fan you would probably recognise the first photo in this entry, which is a replication of it’s first manga cover.

You are probably wondering how it’s done. How the heck did we managed to shoot such an unreasonable and inhuman pose?! And what the heck was Fujisaki sensei thinking when he drew his protagonist in a pose that one cannot decide whether he is falling or flying!!!?! What kind of cover art is this to kick start a new series?!?!

Sorry I digressed. Brian and I discussed and brainstormed a lot about this and after much discussion, we came up with the idea of making a makeshift white screen studio in the middle of our outdoor location to get this. Our plan, if I recall correctly, was to aim to achieve this effect by having me 1) pose on a chair and take multiple shots then photoshop it together 2) have me jump , bend my back and let the shutter fly hopefully capturing something useful. 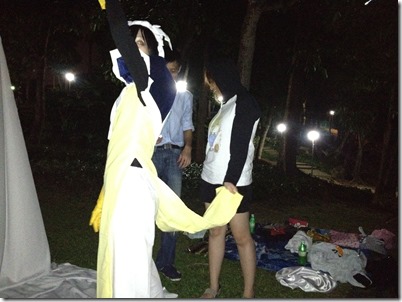 The white screen set up in the middle of the park in the dark, LOL! 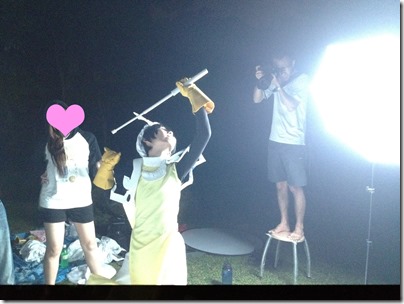 To achieve the correct perspective that was similar to the artwork, Brian had to stand on a stool and shoot from an extreme top down angle. Then I have to try my very best to bend backwards as much as I possibly can. 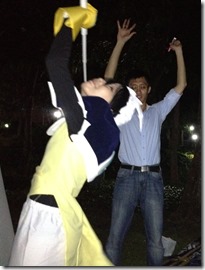 I know it doesn’t seem like much but I’m really not very flexible, neither do I do Yoga. Every snap on the shutter and every tick of the clock felt like years when my back is bent like that. I also tend to have low blood pressure so my head was crying out everything time I stood back X_X.

We tried both methods for a couple of times and decided it wasn’t going to work.

So we tried the 3rd method, which is to take photos of the torso and lower body separately then photoshop them together. 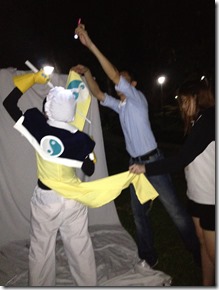 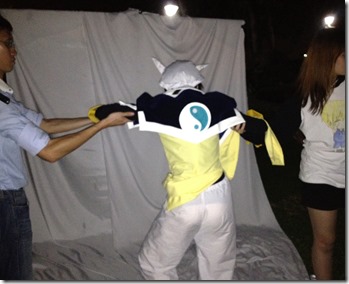 For the lower part of the body, I was supposed to jump and get into position but I’m apparently not athletic enough …. so my poor helpers had to hold my arms like this =_=; 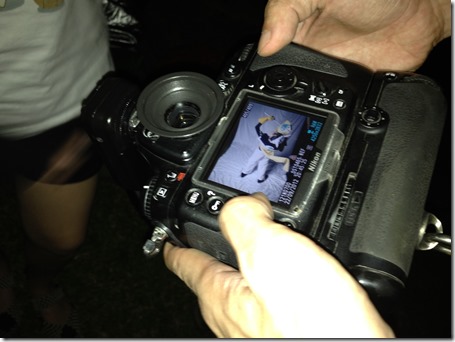 Here’s roughly how each picture looks like. What’s left after this was a lot of photoshopping by yours truly… I swear I have not done such extreme DI for a longgggggg while =_=;

The whole shoot ended at around 9+pm and we were starvingggggg. Again much thanks to my lovely Helpers and Photographer for making my dream shoot and dream pose come true! Lastly, I would liek to thank my Yozen, Yuanie for her incredible patience and for sticking through the project with me T_T

Hope you guys had fun reading! Remember to leave me a comment and pop over to Yuanie and Brian’s Facebook page if you want to see more of their other works! Of course, pop over to TCC’s facebook too if you have not ! There is a lot of funny nonsense there xD

On behalf of the National Library Board (NLB), we would like to invite you to pledge your blog to the Singapore Memory Project as part of efforts to collect memories that are already manifested in existing online channels.

The Singapore Memory Project (SMP) is a national initiative to collect, preserve and provide access to Singapore’s knowledge materials. Spearheaded by NLB, the SMP aims to build a national collection of content in diverse formats (including print, audio and video), to preserve them in digital form, and make them available for discovery and research.

By pledging your blog to SMP, you are affirming that every memory matters. Whether your posts are an account of your daily life, or an expression of your thoughts, the SMP hopes to find a home for your memories so that it can help build towards an understanding of Singapore. You will also receive a badge that you can display on your blog in recognition of your contributions.

Contributors to this blog pledging initiative will be listed on Singapore Memory portal’s blog pledging webpage. All blogs pledged to SMP will archived using NLB’s web harvesting software, in addition to images of each blog’s landing page.

If you are keen to pledge your blog to SMP, simply fill up our response form at this following URL: http://singaporememory.simulation.com.sg/Public/Pledge.

You may find out more about this initiative at http://www.iremember.sg/?page_id=2822.

We are looking forward to your contribution. Do also let your fellow bloggers know about this initiative. They can pledge via the URL above.