Popular Japanese Seiyuu; Tomokazu Sugita, Horror Game Writer , Makoto Kedouin and Game Illustrator Nao Shirahane were in Singapore 2 weekends before for the Singapore Toy Games and Comics Convention. The 3 of them had a Creator’s Panel on the saturday of the event and shared their experiences about creating games and voice acting.

Photography, and Videography were strictly not allowed so I’m sorry, there’s no media to share here =( Also, I would like to apologies in advance for the horrible transcribe below and lacking of the correct character/ series name. As an audience who is Japanese illiterate, it was very hard to follow the interview. To make it worse, the sound system was a little muffled and not everything was faithfully translated out. So take what I transcribe with a pinch of salt haha! 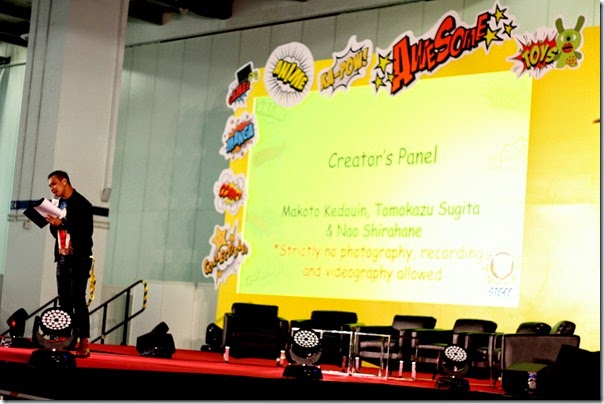 T: Minna san osashiburi desu (He had his own panel 2 hours before). I’m really happy to be here again in a Yuuya KizamiCosplay (Corpse Party: Books of Shadows) . However, once I put on the wig I look like Chikudashiyomaru from ??? 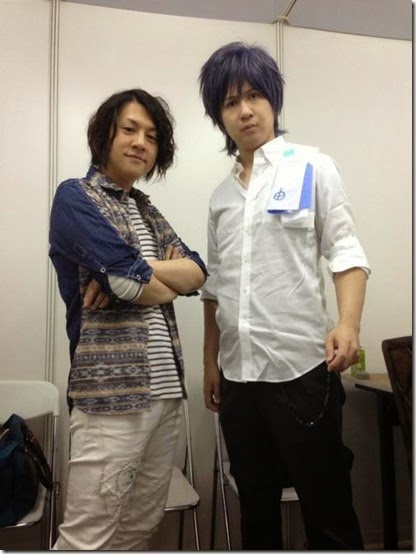 Host: Is Singapore what you imagined it to be?

M: I feel like Singapore is very beautiful and even the air is clean and pretty. I feel like I’m in heaven right now.

T: I can’t forget Singapore . I really couldn’t make out what Sugita was saying here but the translator on stage translated that “He had a very serious look on his face and …he says it’s like the horror games”

N: The food in Singapore is very good and I’ve been eating a lot. And today when I cosplay, I feel like the clothes are a bit tighter haha.

H: Speaking of food, I know Sugita san had Crab yesterday. What food have you eaten in Singapore so far?

M: I had Tom Yum Goong yesterday. I usually can’t take spicy food but the one I had yesterday was mild and it was very delicious.

T: I want to make Kedouin san eat durian. And last time, I had him eat this oden like beancurd skin with Mints inside; it was really bad.

N: I haven’t eaten much Singaporean food except the Crab . But the hotel has an interesting buffet and I’m looking forward to that.

H: I understand that the three of you arrived at Singapore just at 2 O’clock yesterday (???)

M: I arrived in the afternoon and this is actually the first time I flew on a plane. (??????????????????). I got a little dizzy actually but thankfully I managed to recover after some rest yesterday.

T: I was playing on my Nintendo 3ds on the plane and before I realized, I was in Singapore. Ah it was a scary game.

N: I was very excited about the trip but I was also very tired before the trip. I fell asleep on the plane and before I knew it, I was in Singapore.

H: Before you became a voice actor, a game maker and illustrator, what did you passionately wanted to be while you were growing up?

M: Before I became a game creator, I wanted to be an illustrator, manga artist. I started playing on the family Console. It was a game called “XXXXX I am sorry I can’t make out the name XXXXX” which is also a horror game and I started to like the horror genre a lot. This started me producing horror games.

N: I had a lot of dreams as a child. Initially, I wanted to be a teacher but as time went on, I realize I really like to draw and I draw a lot. I was drawing a lot of games and so I became an illustrator.

H: What kind of game is corpse party? Tell us more about it.

M: Corpse party is a game which is based in a school. All the characters that appear there study in the school and they were locked up there for no reason. It’s a battle for survival within the school itself.

H: Let’s look at the photos for corpse party together. 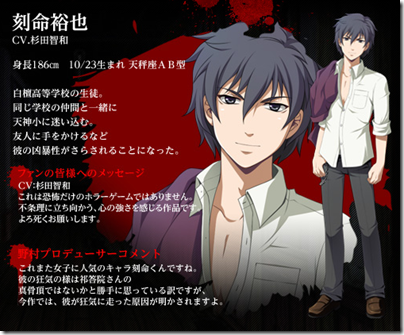 T: This is a secret that’s only going to be shared here but before I decided to cosplayed this character (blue hair white shirt), I wanted to cross-dress this girl 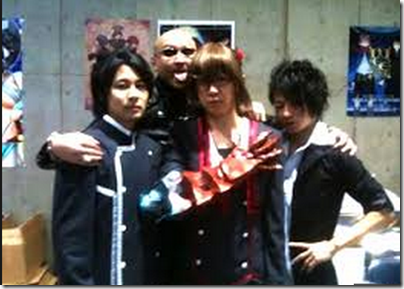 * Kaika’s note: Sorry I totally missed the girl he was referring to… But i randomly found this picture of what they say is Tomokazu Sugita cross-dressing as Eiri Mizuki *

T: Haha but no no it’s impossible for me to pull off a girl.

H: Kedouin san, so what started you on writing corpse party? Why must it be a horror genre?

M: As I’ve mentioned a little just now, I start liking the genre after playing the game “XXXX” on the Family Console and with that, I’ve also started to watch a lot of horror movies. With the influence and inspiration by what I watched and play, I’ve decided to write my own horror story.

H: Ok cool, thanks for the answer. Sugita san, I actually hear that you will be involved in an original game. Tell us a little more about that.

T: *Points to the first row guest* I’m very interested by the fact that these fans over there are all different race

H: Let’s take a look at the video.

T: This video has been up for quite a while now but whenever the girl with the twin tails goes “bang”, I still found it very impactful. This video is also available on the official site so if you’re interested to find out more, please pop over to the site.

H: I love it, I love the video. It’s got so many colours and everything behind it. You’re a famous Seiyuu, You’ve got so many voice acting for many games and anime. But not in this one, is there a particular reason why?

T: Ehhh we actually spoke to one of the higher ups of the game and they actually asked if I wanted to make a game and I was like “Oh okay” so, this game came about.

H: Last question and this is one I’m sure the fans are interested. Are you planning to follow up this particular series or will you be coming up with a brand new game?

T: We are actually in the midst of it and we’re trying to present it to the fans in a manner that they will love it. I need a lot of help from Mori-san of Arts System Works however as Mori-san is very busy with BlazBlue now, I can only approach him after He is done with BlazBlue.

I’ve actually invited Mori-san to draw some special illustration for my game and I’ve been pushing him for the pictures. But because Mori san has been very busy with BlazBlue which I’m also voice-acting for… so I guess I shouldn’t push him too hard.

So does anyone here likes BlazBlue? I think I saw some BlazBlue cosplayers.

T: Mori-san will be very happy to see you. It’s a general misconception that Mori-san is a Vice Cooper （Kaika: WAD IS TIS?????????!)  but he’s actually not one. He’s actually a very popular illustrator.

H: Nao san, I understand you are actually involved in both games, could you tell us a little bit about your involvement?

N: I’ve actually did the illustrations for the limited edition bonuses for the game

H: Cool, speaking of illustrations. You’ve done a lot of illustrations for games but you’re also very active in the Doujin Circle and contribute a lot to the light novels. Is there a difference between doing commission work and your own individual work?

N: For my own doujin works, I can do whatever I want in my own creations. But for games, my art can be used by many other people ; for example it can be adapted to 3D or other CG forms of it. So it’s not just me who’s doing the crazy work, so in that sense I have to adapt to the specific requirements. And that can be a challenge to me but I enjoy it very much.

H: What’s the hardest commission you’ve done and why?

N: All my works have a challenge in them. I’ve actually done illustrations for a 3DS games before and one of the challenge was drawing the same character from different angles. This was so that the 3d producer could reference the pictures and recreate the illustrations. I had to continuously work with the 3D producer to make sure certain details are consistent with the original illustrations.

H: Fantastic. Thank you very much for that in fact we would like to wraps up the panel. But I think we have enough time for about two or three questions from the floor, so we’ll let our guests from the panel pick the questions. If you’ve got a questions, raise your hand and if you get selected you’ll get a prize.

Q 1: To Kedouin san, what do you appreciate most about your fans?

M: I really appreciate those fans who XXXX his characters

Q1: Can I ask another question? Actually I’m interested in becoming a voice actors in the future, do you have any advice for me ?

T: Wellll… it’s good to walk towards the goal of a Seiyuu but don’t restrict yourself to this path. Try to make a path for yourself in other areas for example a farmer (LOL he really said that -_-), teacher or someone working in the government. In that way you can look at yourself more objectively

*Kaika’s note: After some mad hands waving and a lot of encouragements from the friends around me, Nao Shirahana finally picked me!*

Q3 (Kaika): If you could be an animal with super natural power, what would you be? Could you sing it out?

T: Ahhh that’s such a Muchaburi (irresponsible) question. It’s like a drama CD so it will be difficult for her to sing it out.

N: I want to be one of those Yokan Yokan watch (?)

T: In Yokan Watch the guy (?) got ran over by a car and he got very angry at the car. So before he die, he cursed the car and the car died from the curse. I want to be the voice actor for that car haha.

T: Such an evil character will not appear in Yokai Watch(???). Kedouin san is already a monster with super natural powers so he doesn’t need an animal to his aid.

H: And we’ve come to the end of this panel, Makoto- san, Sugita san and Shirahane san Arigato Gozaimasu 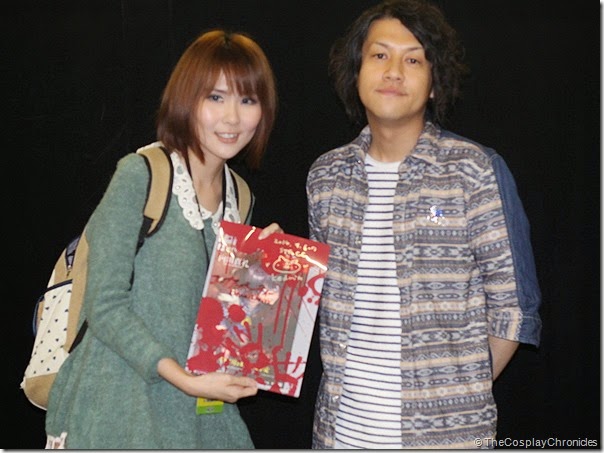 Wheeee I walked away with a signed copy of the Corpse Party Folder. Kedouin-san was even nice enough to allow me a photo with him xD